On Jan 14 officers responded to the report of a grand theft off Cole Rd in Boise.  While the victim was shopping a male and female removed her wallet from her purse and left the location.  The victim discovered the theft after receiving alerts of her card being used at a store off Milwaukee St in Boise.
If you have any information on this theft or the identity of the male and female, please leave a tip with Crime Stoppers. 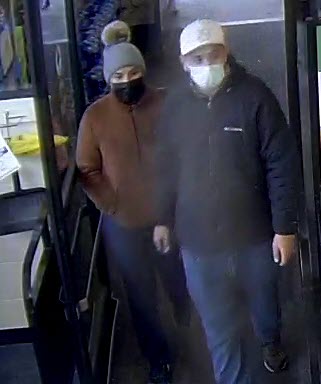 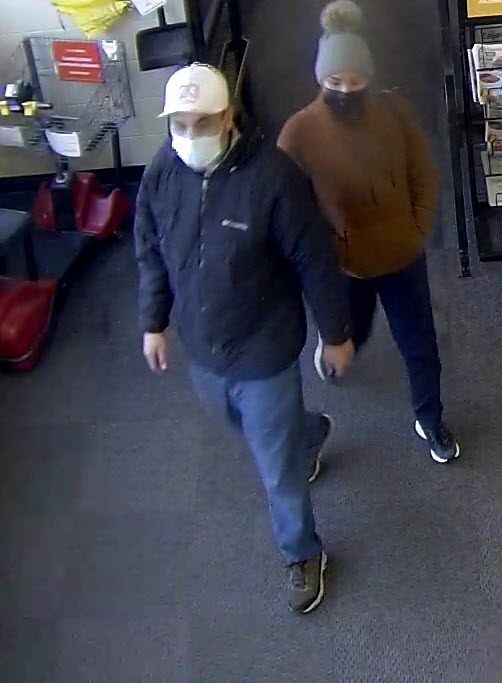 On Sunday January 8, a business near Orchard/Emerald St in Boise noticed a bike was missing from in front of their building.  Upon reviewing video, the business observed a male subject, who was wearing a black beanie, black jacket, and blue jeans select the bike from the front of the building and ride away.

If you have any information on this crime, you can report it anonymously to Crime Stoppers at 208-343-COPS, or leave a web tip at 343COPS.com 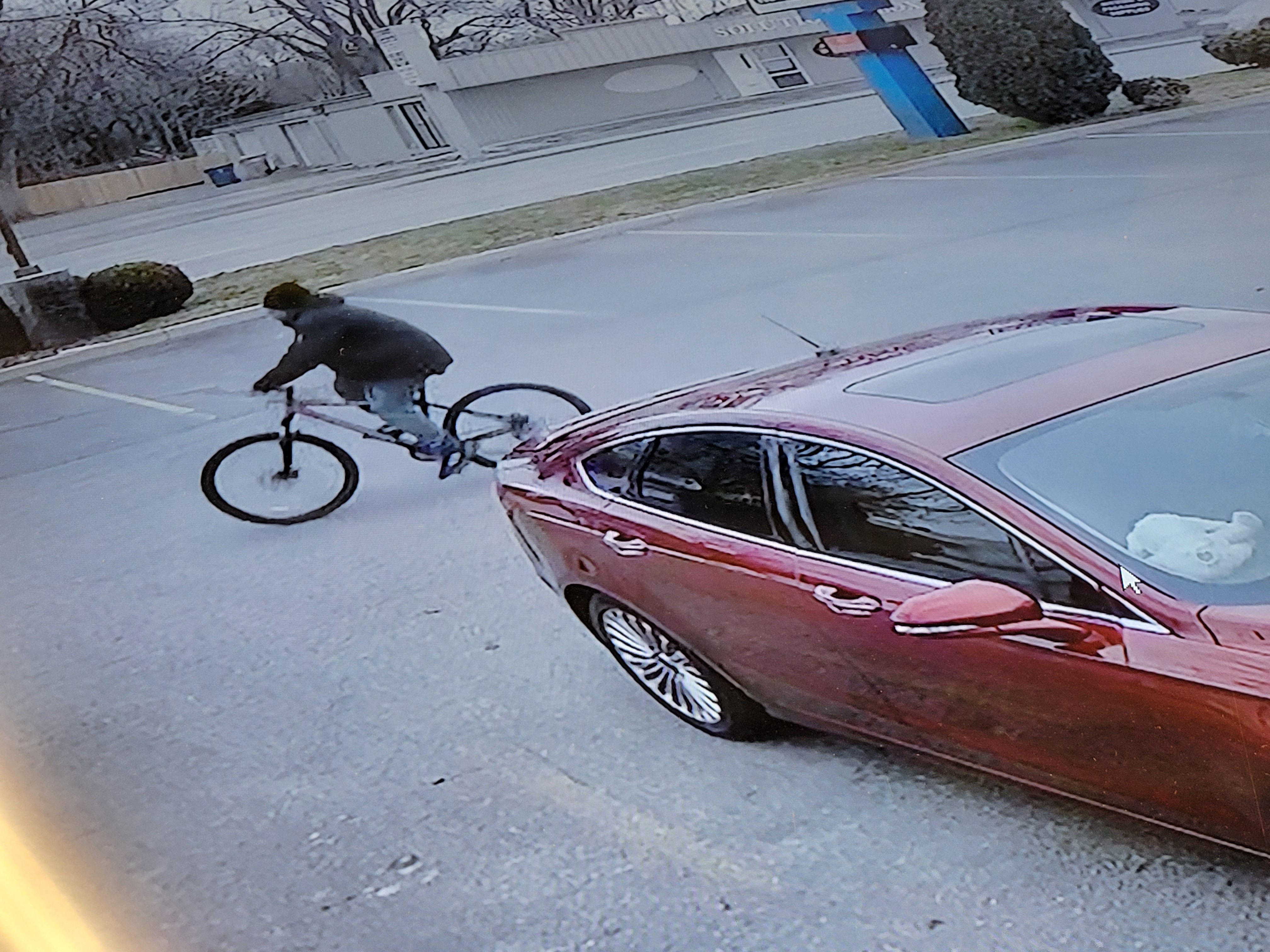 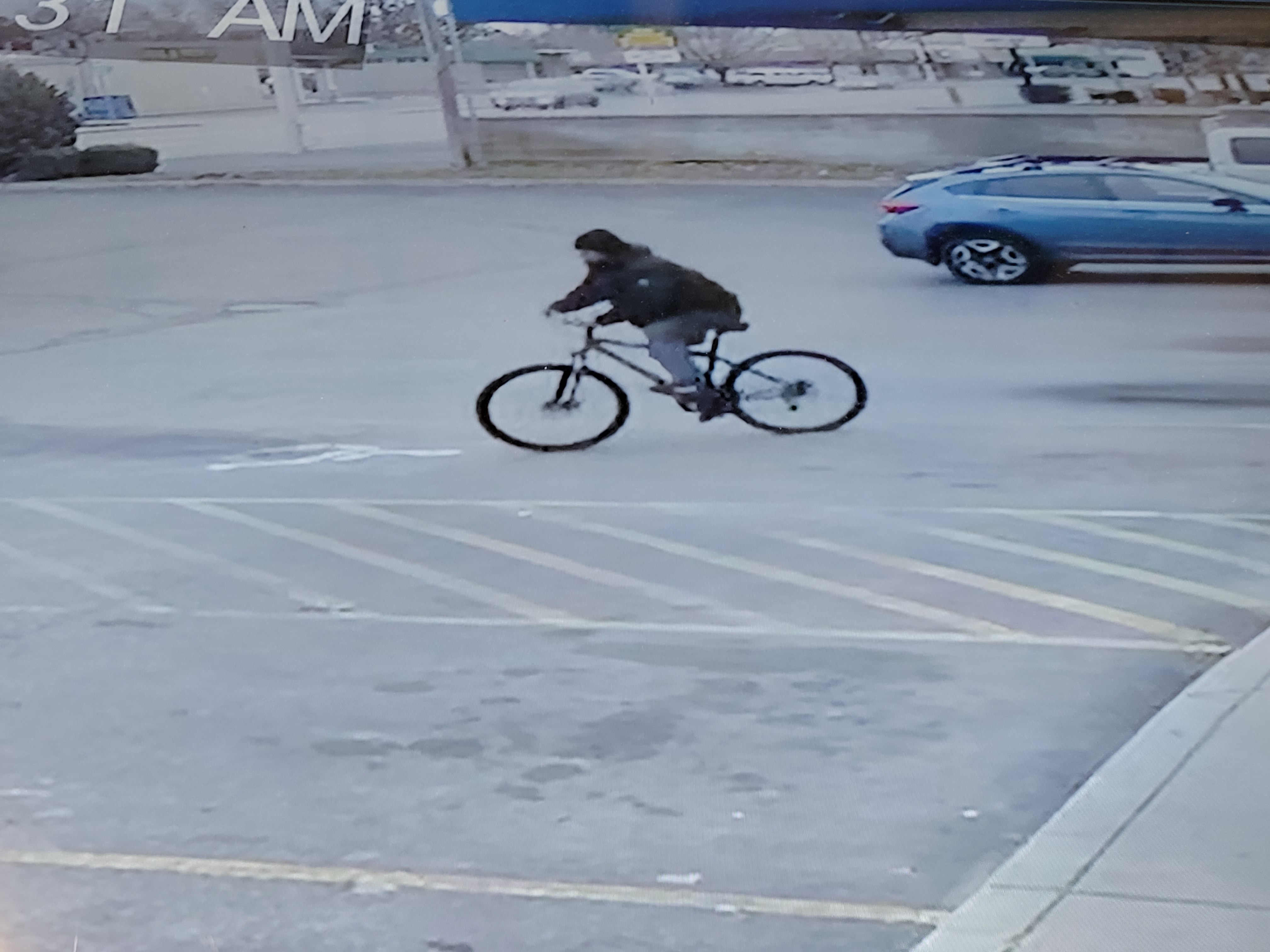 BPD is investigating a series of vehicle vandalism cases that appear to be related.  The vehicles received damage to the tires and in some cases, the body of the vehicle.  The vandalism occurred over the last several days in the North End near 13th St and W Resseguie St, near 24th and Bannock, and near 24th and Main.  There are at least five vehicles that have been damaged between December 18th and December 20th and there may be more related vandalisms.

One suspect vehicle has been identified in one of the reports on December 18th on W. Main Street. It’s described as a 2002-2005 Silver Honda Accord with stock wheels and no front plates attached at the time of the incident.  The driver is male and appears to have lighter complexion and brown or medium toned colored hair.  The suspect appears to use a battery operated drill, as seen in the surveillance video.

The damage in this incident matches the damage to other vehicles.

Anyone with information or who sees suspicious behavior in this area is asked to call police dispatch at 208-377-6790 or contact Crime Stoppers.

On Dec. 18, 2022, Boise officers responded to the report of a battery at a business in the 100 block of E. Myrtle St.  The victim reported as they were exiting the business a male subject unknown to the victim inappropriately touched them.  The male rode away on a bicycle.
The suspect is described as a while male who was wearing glasses, a beanie, a dark jackets and dark jeans at the time of the incident.
Officers were able to locate video of the suspect and are asking for your help to identify.
If you have any information on the identity of this male you can report it anonymously to Crime Stoppers of South West Idaho. 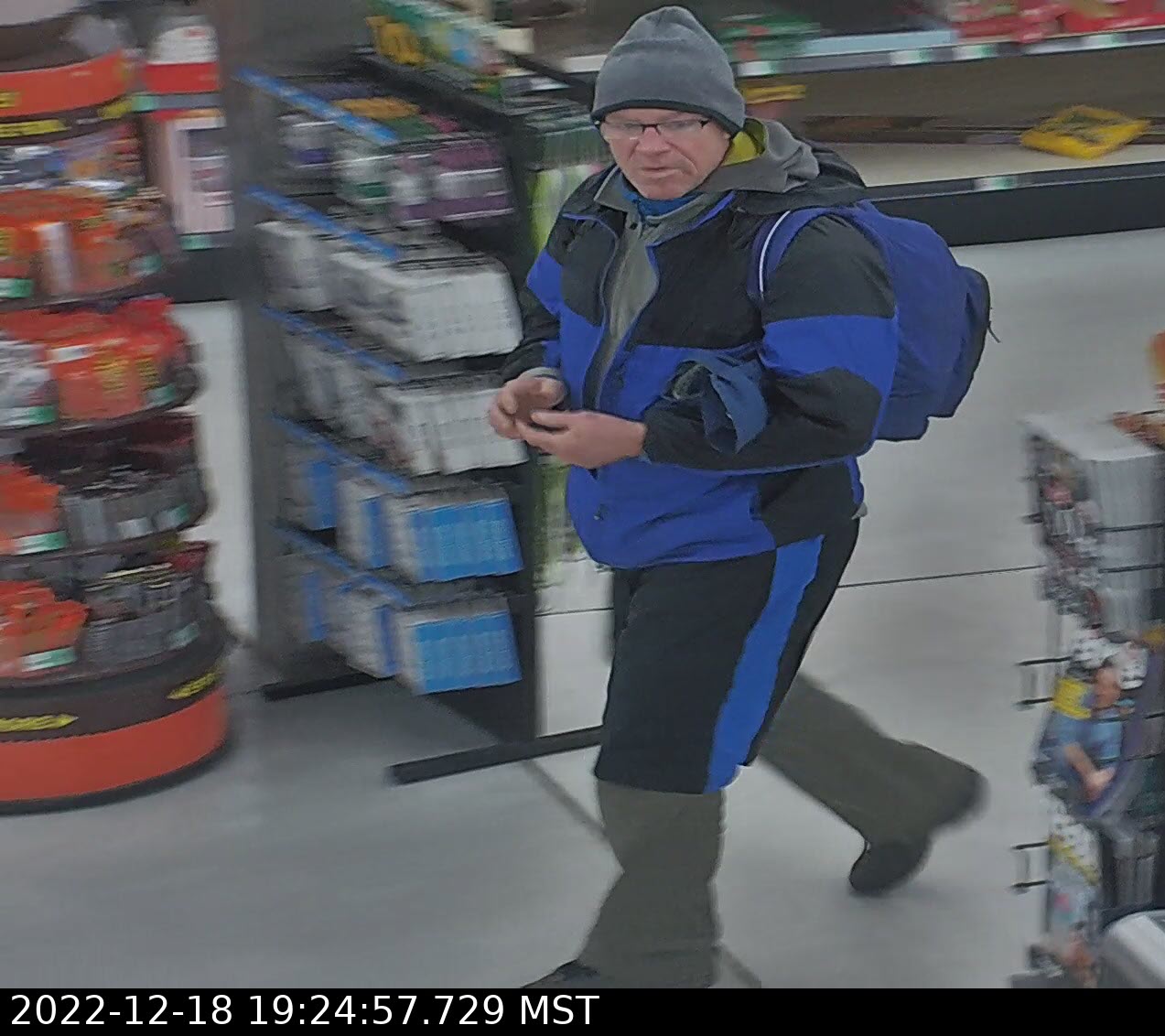 On November 30, officers were called to the report of a grand theft off S. Broadway Ave. in Boise.  The victim reported accidentally leaving their credit card on the counter of a business and leaving the store.  Upon reviewing video to locate the card, a male was observed taking the victim’s card from the counter and exiting the store.  The male drove away from the business in a gray convertible.

If you have any information on the theft or the identity of the male involved, call Crime Stoppers at 208-343-COPS (2677) or leave a web tip at 343COPS.com 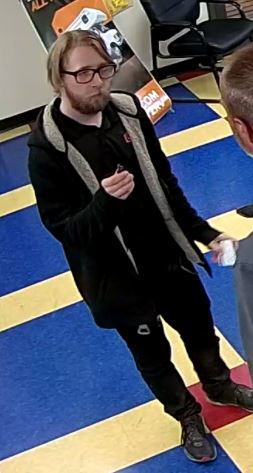 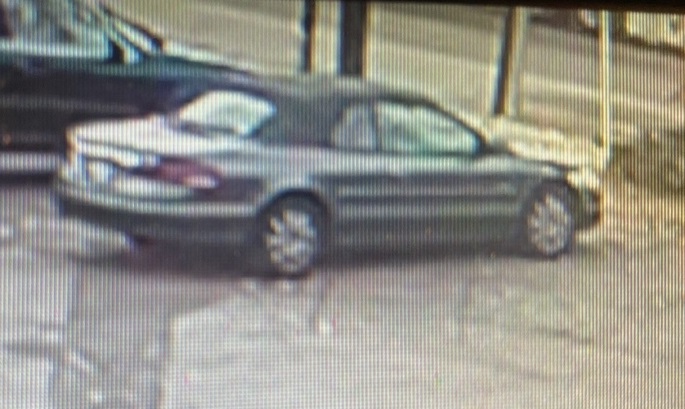 On November 22, Boise officers responded to the report of a luggage theft at the Boise Airport.  The victim reported his bag was missing but the airline had scanned the bag when it was unloaded from the plane in Boise.  Officers were able to review video to observe a black male adult removing the victim's bag from the luggage carousel, meet up with another male wearing a red LA Dodgers hat and exit the airport.
If you have any information on the identify of these males, please contact Crime Stoppers at 208-343-COPS, or leave a web tip at 343-COPS.com 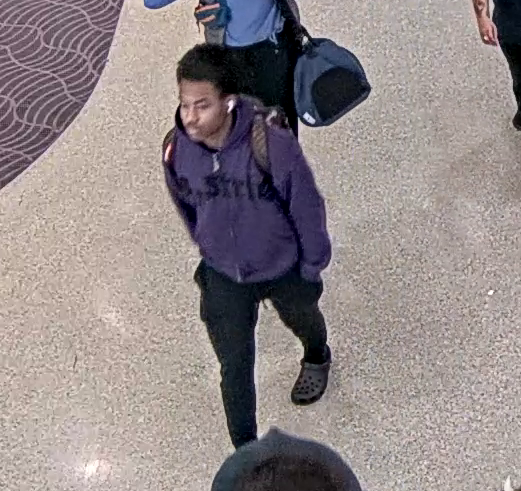 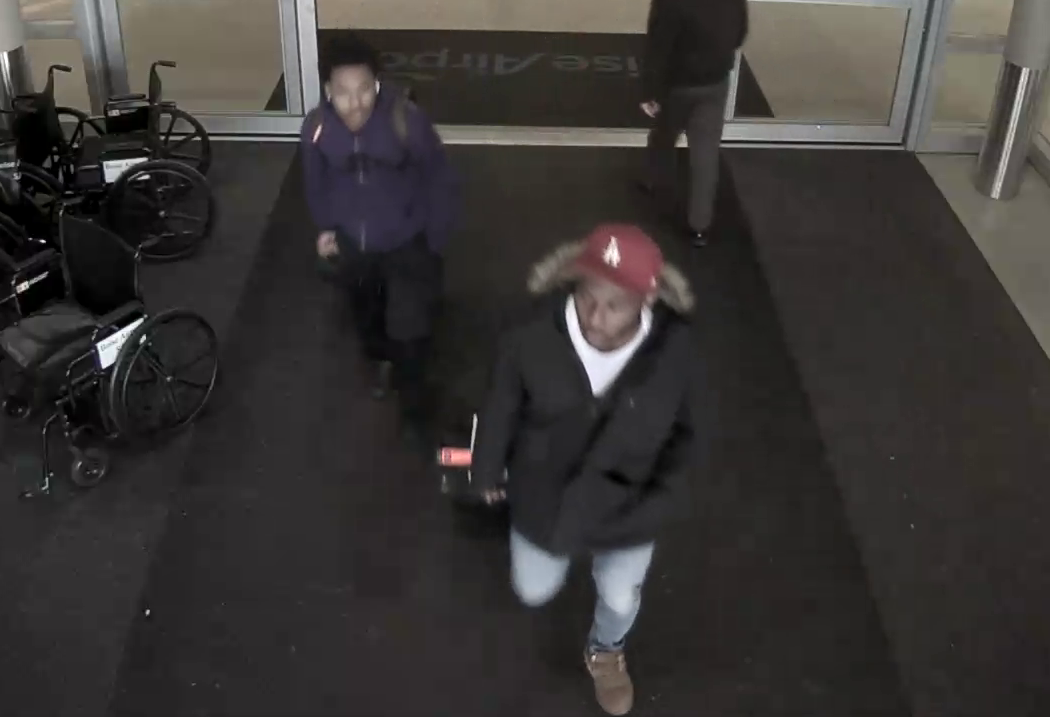 Just before 5am on Wednesday November 2, Boise Police responded to a report of an armed robbery that had just occurred on the 6000 block of W. Fairview. Evidence indicates the suspect entered the business with a weapon and demanded cash. Officers secured the scene and did an area search for the suspect.

The suspect is described as a white male adult, approximately 25-30 years old, 5’6”, around 160 lbs.. He was wearing a hoodie, grey sweatpants, black beanie, sunglasses and a green bandana over his face. 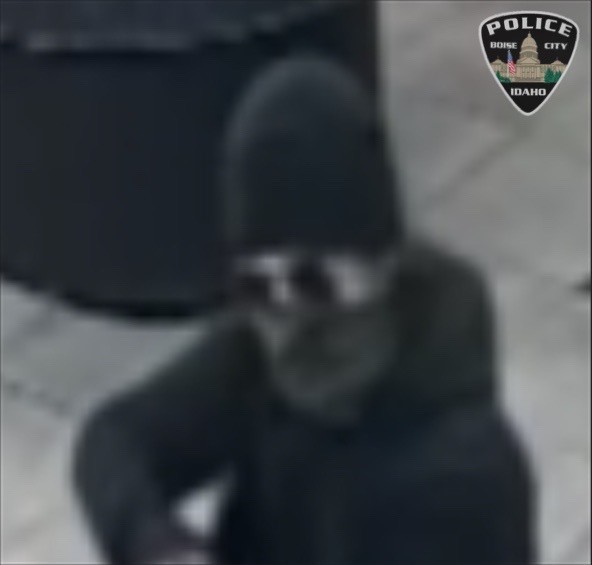 On Oct. 25, the pictured male stole a locked bike from a rack on S. Chrisway Dr. in Boise.  Officer were able to use video from cameras in the area to obtain images of the male suspected in the theft. 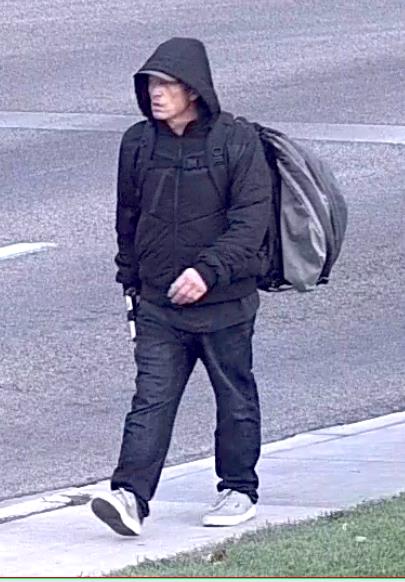 On Sept. 19 officers responded to a report of the theft of a high-end bike from a complex off 4th street in Boise.  The victim noticed their bike was missing from the complex bike storage room but the lock for the bike was cut and left behind.

Working with apartment management, officers were able to obtain images of two males entering the storage room on Sept 17 around 11am, taking the victim’s bike and a scooter which has not been reported as stolen.

Go to 343COPS.com and click on Unsolved Crimes to view pictures of these males.

If you have any information on the theft or the identity of the two males involved, call Crime Stoppers at 208-343-COPS (2677) or leave a web tip at 343COPS.com 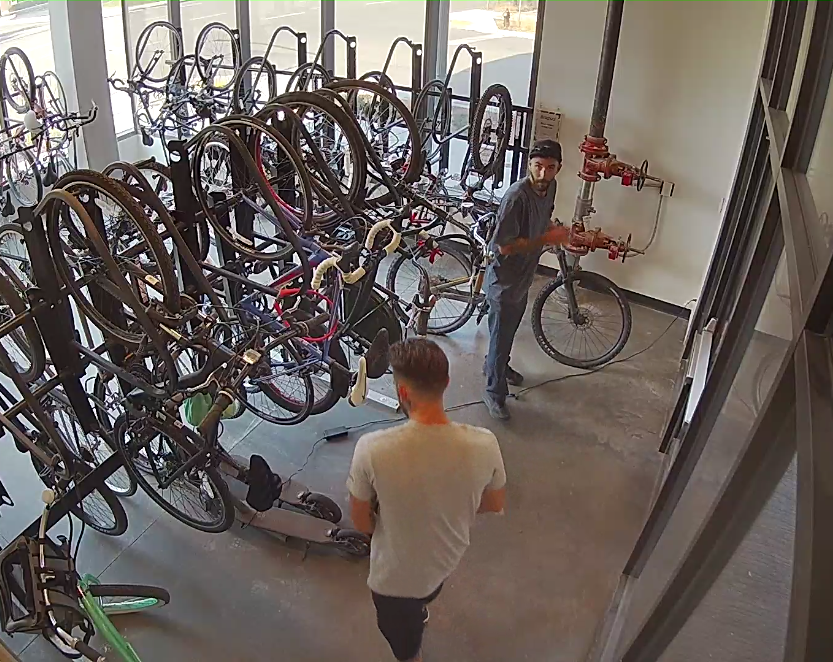 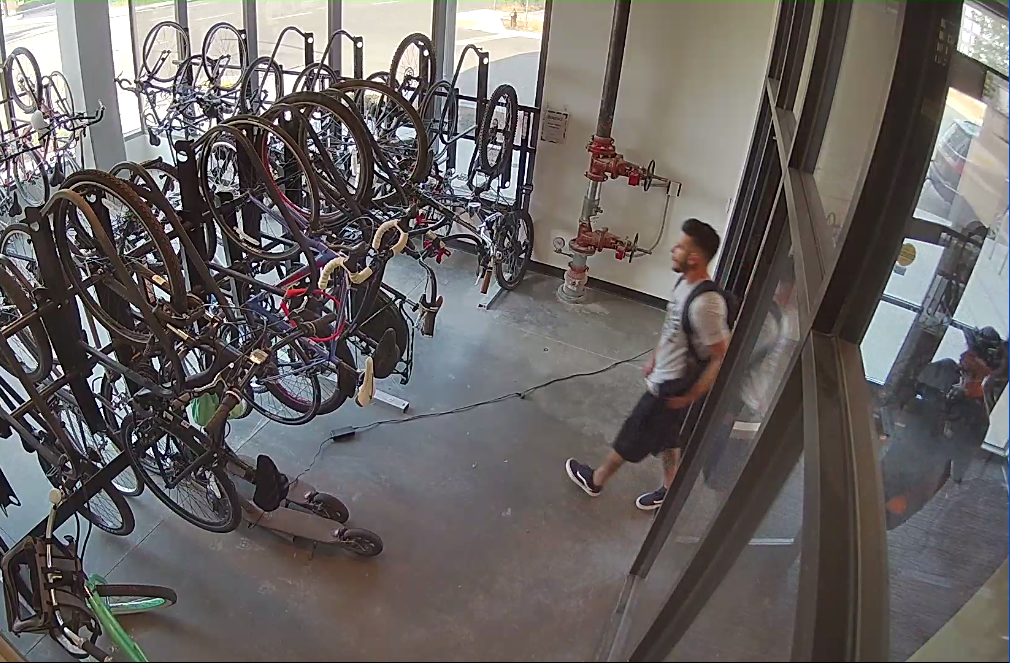 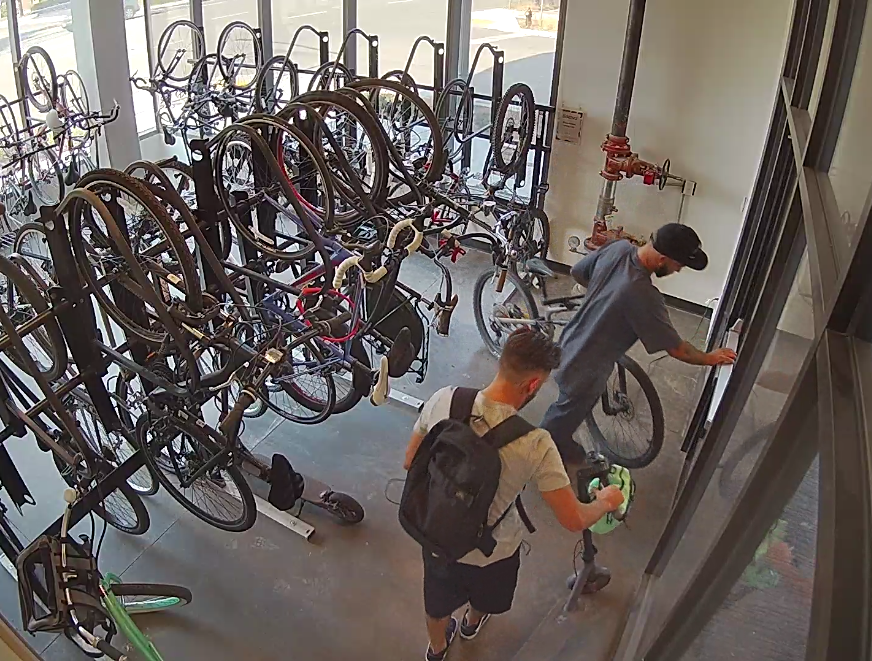 On Sept 2, officers took a report of a grand theft, where the victim reported their debit card was taken some time in the past three weeks from the retirement facility they live at.  Upon investigation it was found the victim’s cards were used to make thousands of dollars of purchases in Jerome, Burley, and Twin Falls on Aug 25.

Officers were able to obtain a picture of a female involved with the crime using the victim’s credit cards at one of the retail locations.

If you have any information on the identity of this suspect or crime, you can report it anonymously to Crime Stoppers at 208-343-COPS (2677) or by leaving a web tip at 343COPS.com. 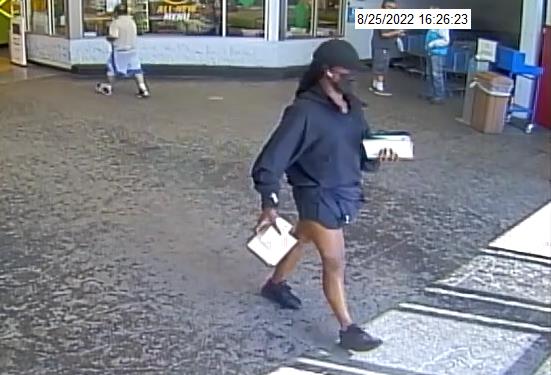